We are continuing a tradition over 80 years long

On 6 January 1933, with a deed from the notary, Emilio Canali, the cooperative company “Casello Sociale del Fornacione di Felina” was founded with 84 members, who provided 97,000 litres of milk and 70 pigs.
The dairy farm was built on a plot of land purchased from the priest, father Anastasio Corsi, and it only operated from 1 March to 11 November, St Martin’s Day and the official date of the end of the farming year. 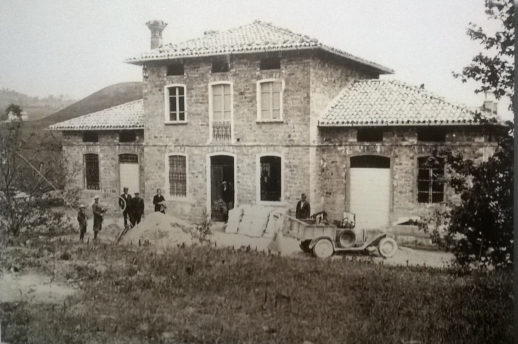 Angelo Pignedoli promoted the creation of Fornacione, who had a farm in Felina, in La Ca’, and another one on the plains. He lent money to the dairy farm, whose members largely did not have much milk, except for certain large farms: Beneficio parrocchiale, Roncadelli, La Ca’ and Le Tegge.
A few farmers from around Monte Fasola used to bring the cheese factory a litre and a half of milk in the morning and evening; at that time, anyone who worked the land lived by the day from dawn until dusk just to eat and support their family, which were usually very large.
“The dairy farm”, recalled the almost one-hundred-year-old  Walter Zanelli,, who was born in Felina on 12 September 1914, “was built by the Carubbi firm: to save money, there was only one bricklayer, the owner, Giuseppe Carubbi, known as Gigiùn, helped by a few young men working as day labourers. For years, I brought them the milk and bundles of firewood to burn under the vat.
Two whole Parmigiano Reggiano cheeses were made a day until the Second World War”.
In Ramusana, a stone’s throw from Fornacione, the first meetings about creating the dairy farm were held in Matteo Zanelli’s house. “We used to prepare the wood behind Monte Fasola”, recalled Matteo, “and took it straight to the cheese factory with cows; the amount varied depending on the milk which each family provided. You needed milk from at least 60 cows back then to make a whole cheese.
Franco Zanelliwas born in 1923 and talks openly of when as a child (as there was no space in Ramusana where his parents Egidio and Rosina used to live) he lived in Le Tegge with his grandparents on his mother’s side, Lorenzo Braglia and Teresa Palladini, and at only 9 years old, he used to herd sheep with his uncle Paolo, who became chairman of Fornacione in the late forties/early fifties.
“My father and his other brothers”, explained Franco, “mined the stones to build the dairy farm: it was winter and they transported them down to Fornacione with sleighs. My father was a labourer: they dug a ditch near to the cheese factory with a shovel and mallet. As children, we used to make the bundles of wood in the forests for the dairy farm. My parents only had three cows and I used to go to the cheese factory with 4-5 litres of milk.
Even though we were poor, these were good times: we used to play hide-and-seek around the furnace tower”.
The history of the Felina dairy farm is also a trip down memory lane for Sergio Bettuzzi, born on 12 March 1925. “When Enrico Bottazzi, the first cheese maker at Fornacione, used to make the whole cheese, he used the two vats that were there then”, he explained, “and as children we used to pass Fornacione to go to school in Magonfia, he stopped us and got us to throw water on the fire when the temperature used to reach 39-40 degrees”.
The first core of what would become one of the largest and most productive companies in the dairy sector in the province of Reggio Emilia was transformed into the limited cooperative company “Latteria Sociale del Fornacione, Società Coperativa a responsabilità limitata” on 31 August 1941, with a deed from the notary, Cersare Bossi.

In reality, Fornacione’s history is about people, who have always believed in the cooperative dairy farm, defended it and always developed it with foresight. 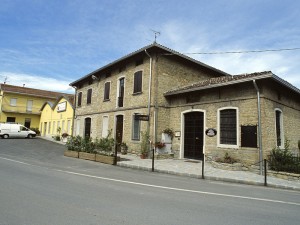 Today, Fornacione is one of the largest companies in the Reggio Emilian mountains and one of the most important cheese factories in the province, but even with ongoing transformations and innovations, it has been able to maintain a close bond with its history, starting from the head office which, while undergoing recent renovation work, has kept the same factory from 1933, displaying an incredibly beautiful stone building that is also home to the welcoming shop.

The furnace and the Fornacione dairy farm stand out against the Felina countryside and the mountain, serving as a symbol of mankind’s work.
Since the start of the last century, the Felina furnace has been the centre of work and production in Felina and the entire area. 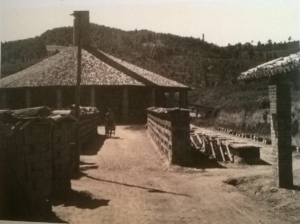 The work carried out at the dairy farm is directly linked to working the land, our region and our farms; it is a real rural economy and culture, which puts work and people’s actions at the centre, like an asset for the common good.

The furnace and the Fornacione dairy farm stand out against the Felina
countryside and the mountain, serving as a symbol of mankind’s work.

The Second World War was also an incredibly difficult time for Fornacione because any more able men went off to war, various heads of the family were sent to Germany, the fields were no longer properly farmed and from 1943 to 1945, cheese was often taken by the Germans.

Once the war was over, economic recovery was slow, but there was a great desire to do something, to start again, to grow and to have a better future. So while the 1948 financial statement showed an overall dividend of 781,108 lira, the 1956 financial statement was 12,111,453 lira and in the meantime in 1952, the Board of Directors decided to approve a five-year loan of 3,000,000 lira to renovate the cheese factory, with 1,000,000 for the expansion of the building and 2,000,000 for the purchase of the steam boiler and the relative equipment.

The Fornacione dairy farm was increasingly becoming the beating heart of Felina and a centre for attracting not just milk producers but also young people.

“In 1960”, explained  Ugo Ferrari, , who became the treasurer in 1973, “I worked as an apprentice at the dairy farm; we carried the feed up for the pigs over our shoulder, mixed it with the shovel and took it back down with the bucket.

The boys and girls met up at the cheese factory and then went home together: the girls made themselves beautiful for the occasion. Where the warehouse now stands, there used to be a vegetable garden. Our cheese factory has always looked ahead without taking a leap in the dark and seeking the most sharing possible among members, perhaps after endless discussions: for example, in the late sixties, a new pigsty was built, which cost 14 million lira and was paid for in just one year, having assessed, postponed, voted and re-voted this construction for three years”.

“I joined the Fornacione Board of Directors”, explained Nardo Ferrarini – in 1977, after having spent a couple of years as the Auditor, a role that suited me because I preferred being more operational and because I have always been encouraged to express my opinion directly.

That first year was difficult, because the milk processing was the lowest in history and the price of cheese was not appropriate, but we were young administrators, full of enthusiasm and a desire to get to work”.

Nardo Ferrarini, was the deputy of Dulio Eusebio Ferrarini from 1978 to 1995 and ever since to this very day has been the Chairman of Fornacione.